LPC Books has several FREE suggestions for us today, we’ve seen this one several months ago.

Meant for Me (The Carlyle Women Book 1)

Meant for Me, Book 1, 1920’s
Born at Carlyle Place, the plantation her family has held for over two hundred years, Chloe Kimball was raised to be the perfect Southern lady. Still, she resists being the prize that her parents—an ambitious society maven and an equally ambitious politician—war to control. Surprising even herself, she breaks free. America has just entered the First World War and Chloe learns how to make her own way in 1917 New York City–a place nothing like home.

The second LPC Books FREE book suggestion is one I’ve not seen before.

The Seer: The Kalila Chronicles

Viktor has one order to follow:
Kill the girl before her eyes are opened.

For thousands of years, his job has been to torment and kill seers: humans that have the gift of seeing the spiritual realm. So it was no surprise when his brother Matthias was once again sent to stop him and protect the girl.

Now the last of the seers’ bloodline hangs in the balance, as the estranged demon and angel brothers are forced to work together to save a girl’s life and escape to the sanctuary city of Bethesda.

BookBub has a bargain suggestion for us  @$0.99. This is another book I’ve not seen before but it looks like it could be fun. I’m not entirely sure why a book would be numbered 2.5. Could be it will make sense once I’ve read them all. Interesting.

Love in Store Book 1: The Wedding List
When physics professor James Tetherton-Hart, brilliant in his research lab but disorganised in everyday life, comes to Pettett & Mayfields department store in need of both a gift and a partner for a wedding that evening and recognises her, his first love, Beth, finds her careful plans are turned upside down. James is determined to make her his partner for life, not just the evening. But unless she can let go of past hurt and the mistaken beliefs that separated them last time, and learn the depth and breadth of God’s love, her only gift from the wedding will be another heartbreak. A reunion/ class differences romance.

Love in Store Book 2: Believe in Me
When Nick Gallagher, the Hollywood actor playing the store’s celebrity Santa challenges Ms Scrooge accountant Cara to a Christmas dare, can she overcome her painful past and rediscover love, joy and faith? A heartwarming reminder of the importance of believing in God’s promises, along with a lot of London Christmas sightseeing in this opposites-attract romance!

Love in Store Book 2.5: Least Expected
Maggie Golding, unconventional and artistic 50-something designer for the Christmas store windows at Pettett & Mayfields, never expected to fall in love with Edgar Pettett, staid and sensible heir to the business.
Between her shaky faith, their huge differences, and his mother’s disapproval, how will they possibly work things out? A sweet mid-life second chances romance!

Love in Store Book 3: A Model Bride
Christmas in London, New Year’s Eve in Edinburgh, where next? Nothing in her Europe trip goes as Tiffany Gallagher planned, but when she meets wounded Scottish photo-journalist Mac while volunteering at a homeless shelter, she discovers God’s purpose for her life is far more than she imagined! An emotional enemies-to-love romance.

Author Jennifer Youngblood has a bargain suggestion for us from one of her friends. @$1.41 CDN. This Cinderella story is told in four parts.

Searching for Love: The Complete Story 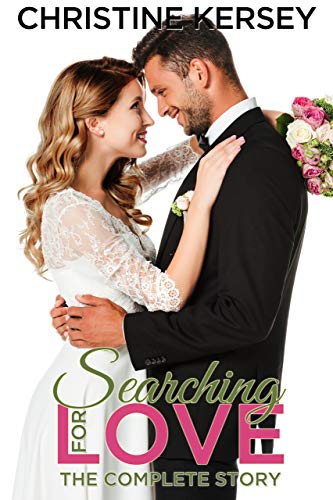 Living in her beat-up RV while running from her past, Reese has lost all hope that she’ll find her happily ever after. But when handsome Brody saves her from drowning on a beach in Malibu, she’s smitten. Too bad she believes he’s way out of her league.

Brody is intrigued by the mysterious Reese, but she’s resistant to his attention. Good thing he’s willing to do whatever it takes to win her over.

Searching for Love is a sweet, clean contemporary romance. This bundle contains all 4 books in the series.

I’m currently reading Caught by Surprise. I picked this one next because I enjoy this author. It’s still a bargain $0.99 which is a good deal.

Miss Temperance Flowerdew is on her way to work when a stranger suddenly grabs her off the street and sends her on a Chicago-bound train before she can figure out what happened.

When Mr. Gilbert Cavendish is called upon to rescue a missing woman, he follows the trail to Chicago only to discover that the woman is his good friend Temperance. Before they can discover who was behind the abduction, they’re seen alone together by a New York society matron, putting their reputations at risk.

Gilbert is willing to propose marriage–except Temperance will have none of it. She’s finally stepped out of the shadow of her relations and won’t give up her independence. But when it becomes clear the misunderstanding in Chicago has escalated into a threat on her life and followed her to New York, accepting Gilbert’s help in solving the mystery may lead to more than she ever could have dreamed.