Out of curiosity, after downloading yet another Staci Stallings book, I searched my downloads to see how many other Stallings books are in my Kindle collection. There have been nineteen since 2012, and only three have been mentioned in this blog. It’s time to change all that.

As an encouragement to writers out there, Staci’s website tells the story of beating the odds while breaking the rules of formula writing. She was also a pioneer in self publishing, before self publishing was even a thing.

Formula writing includes external conflict, Staci’s writing uses internal conflict. That makes her writing a blessing to many because as readers we can relate to characters facing many of the same hurdles we do. 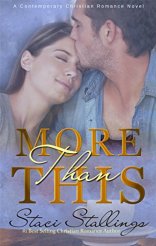 A Novel – More Than This …… Jake likes the anonymity of the dark corner of the coffee shop, a quiet place to sit with his laptop writing the novel that will have his name in lights. At least he’s hoping it will.

Liz and Mia make a game out of examining customers, trying to guess who they are and what they are about. They think the mysterious Jake could be clandestine CIA or something equally exotic. In an attempt to find clues about him Liz makes excuses to refill his coffee cup, succeeding only in breaking his concentration. 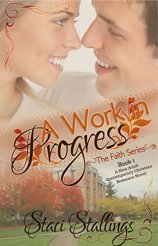 Eric is drifting through college, not really settled on anything, looking at relationships as something to give him credibility with the world in general. Rebecca notices him after a disastrous meeting involving spilled hot chocolate, he’s cute, quirky, and interested in her roommate. 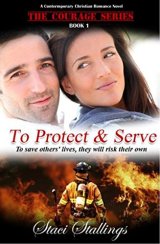 The Courage Series – To Protect & Serve book 1 …. Jeff endures much good natured  teasing from his friends over his inability to strike up a conversation with a pretty woman. Reluctantly, he joins a celebratory night out on the town after graduation at the fire academy.

Lisa is buried under piles of work in her ad agency and does her best to avoid the  awkward situation that will be her sister’s bachelorette party. Things are even worse when the girls move over to join the firemen’s table. 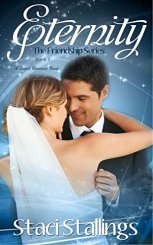 The Friendship Series – Eternity book 1…. Aaron has given up on life and girls since the love of his life left him for someone else. He’s stuck in a job he hates and the only bright spot at work is Harmony, a friend who has always been there for him. Unfortunately for Harmony, she loves Aaron but doesn’t expect he will ever feel the same way about her.

Aaron has a new roommate, Drew, a talented landscape artist who would like to start his own company and Aaron can see he would be great at it.  Drew has met someone special and is on a hot date. I have a feeling I know who that someone will be, and Aaron won’t be happy. 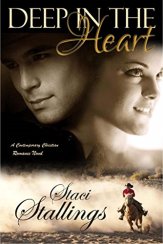 A Novel – Deep in the Heart…… Maggie has successfully applied for a nanny position she desperately needs. What she doesn’t know – the strict house rules have been responsible for the short tenure of the all previous nannies, and there are bets she won’t last either. In the meantime, the children are starved for simple connection   and there is something about her that causes them to cling to her.

One other thing she doesn’t know – the handsome hired hand, who does funny things to her heart…. he’s actually part of the family… and he’s engaged. 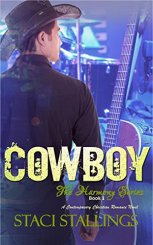 The Harmony Series – Cowboy book 1 ….. Beth is struggling to make a life for her little daughter, stuck in a diner trying to make ends meet, flooded with grief after the death of her husband.

Ashton’s life has been destroyed by the death of his best friend and biggest fan. Tempted to end it all on a rain soaked road, he stops at a diner for a cup of coffee. What he doesn’t expect, as he sits in his misery, is a perceptive waitress wanting nothing from him but the unburdening of his broken heart. She remembers the pain of running to escape and wanting it all to end.