This is the final list of Staci Stallings books in my three-part series of posts highlighting her work. Twenty books (in five years) is an impressive list of downloads, in my estimation.  Part of the reason for so many is her regular willingness to offer books free or at reduced prices….. my kind of books.

I’m pretty sure her books will show up again in my future reading lists and this won’t be the last time we see her name mentioned here.

Staci is prolific, writing in several different styles and genres. Both her writing, and her stories, have a depth that compels us to keep on reading. This makes it possible to read many books from the same author without feeling like it is getting old. I hope you will introduce some of her books to your reading list, if you haven’t already.

Dance With Me ….. Kaci’s dreams are shattered with an injury that won’t allow her to continue the rigorous life as prima ballerina. It’s been three years and she has no hope of ever dancing again…..until she discovers a small dance studio and begins to see a glimmer of possibility.

Josh has hated dance ever since he was bullied because of it years ago. He is in financial straits though, and his mother has decided the only way he will get anything more is to work for it, in the dance studio.

Kaci and Josh must work together and it does not go well.  He suspects Kaci is either a snob, or she is hiding the true level of her qualifications. They are often at odds because they approach dance from different directions. Can they make this work? Is it even worth the struggle?

The Grace Series – Mirror Mirror book 1 …… an epic novel. Sage is living the perfect California privileged life of glitz and glamour, until she is suddenly shipped off to spend the summer with her biological dad’s family. She is about to discover that life is not as perfect as she thought it was.

Luke has lived the life of a slacker. His main talent seems to be to showing up when people need help, and right now Jaycee needs his help. Her forgotten step sister is coming for the summer and Jaycee is panicking. Luke is trying to be there for her but it’s tough. Sage is not turning out to be as horrible as he was led to believe. He’s finding it a challenge not to fall for her.

The Grace Series – When I’m Weak book 2 ….. Jaycee is part of the television industry demanding perfection within tight deadlines. Perfection is what she does best.  She is trying to juggle the challenge of keeping things on track while working with a building contractor new to the world of television.  A handsome building contractor.

Tragedy at home throws her a curve ball. Will she have to choose between family and her job? A job that includes the man who is becoming important to her? 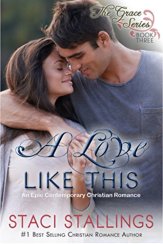 The Grace Series – A Love Like This book 3 …… Rachael, a single mom with two small children, has survived many tragedies in her lifetime but the destruction of her home in a hurricane may be the one that is too much. A solution  presents itself with the arrival of a television construction crew wanting to repair her house.

Caleb’s place is behind the camera, not in front of it as point man for the reconstruction project. His boss wants Caleb to step in as host this time because other obligations won’t allow him to be available for this segment. This is the big break Caleb has been hoping for but it’s complicated by his attraction to Rachael. He would have to leave when the job is complete if he wants to seize further opportunity in front of the camera.

The Grace Series – A Moment Like This book 4 prequel to book 5 …. This book is the bridge between the first three books and the final one. The characters from the first three are gathered together again and a new couple is added to the mix. Loose ends have been tied up and the stage has been set for book 5. 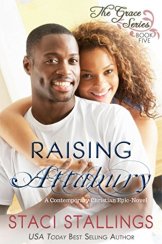 The Grace Series – Raising Attabury book 5 an epic novel ….. Eric and Dani have worked hard to build the successful dream life for themselves. It seems like it should be enough but it still feels like there’s something missing. Dani wants to purchase and renovate a big old house. As things move along with the renovation they find it may not even be worth salvaging after all. Will their marriage survive the rocky places this project takes them? 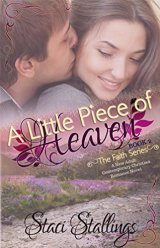 The Faith Series – A Little Piece of Heaven book 2 …… Jeremy thinks he has it all when, unexpectedly, everything comes crashing down and even his friends are gone.

Emily has her life all laid out and a relationship with Jeremy does not fit in with the plan. This is a college age romance. Can they overcome the obstacles and find a little piece of heaven together? 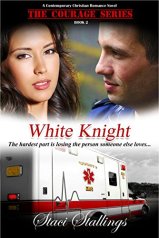 The Courage Series – White Knight book 2 …… Eve has lost the love of her life, a devastating blow that she can’t seem to move past. Her friends keep trying to set her up with guys, sad to see her alone. They are wanting to help her move on with life but it never goes over well.

A.J. finds himself in the same boat, his best friend keeps arranging disastrous blind dates for him in spite of his objections. He notices Eve’s predicament and she has his sympathy.

The Courage Series – For Real book 3 ….. Blaine has a secret and so far he has been able to keep that way…. secret.

Things begin to fall apart when an old friend comes back into his life and starts to ask hard questions. Soon, Melody begins to find that the Blaine she thought she knew is not the real Blaine.

The Friendship Series – The Easy Way Out book 2 ….. Drew is trying to pick up the pieces of his life after the perfect girl left him to marry his best friend and business partner.

It seems Charity is never able to measure up and she resents her perfect older sister for always making her look like second best. While she notices Drew – as he goes about his work – and feels sad for him, she isn’t interested in her sister’s cast offs. Still, there seems to be an attraction there. Is it worth exploring?