BookRunes has a FREE book for us this morning, The Boden Birthright, this is a novella to precede the first book in the Cimarron legacy series. Book 1, No Way Up, appeared for us as free back in August. I remember reading and enjoying it. 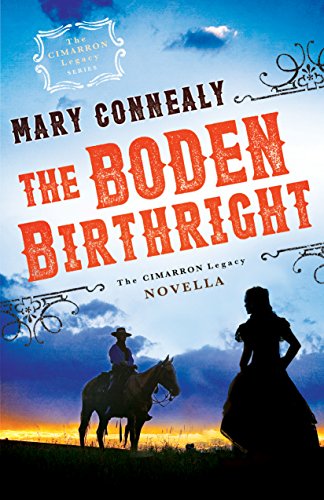 Amazon quote as a refresher:

After the death of his wife, prosperous businessman Chance Boden heads west along the Santa Fe Trail with his son to escape the powerful control of his in-laws. He has plans to establish his own ranch, but instead he finds work with Frank Chastain, owner of a vast amount of land.

Chance doesn’t want to work for anyone, but Frank’s beautiful daughter, Veronica, gives him reason to delay buying his own holdings. With winter coming, no home in which to live, and Veronica’s offer to care for young Cole while Chance learns the ways of ranching in the desert, Chance has little choice but to accept the Chastains’ offer to stay on.

Along with the free book, I came across another of Mary Connealy’s books. It’s on sale, a bargain at $1.99, The Accidental Guardian. This looks interesting too.

When Trace Riley finds the smoldering ruins of a small wagon train, he recognizes the hand behind the attack as the same group who left him as sole survivor years ago. Living off the wilderness since then, he’d finally carved out a home and started a herd–while serving as a self-appointed guardian of the trail, driving off dangerous men. He’d
hoped those days were over, but the latest attack shows he was wrong.

Deborah Harkness saved her younger sister and two toddlers during the attack, and now finds herself at the mercy of her rescuer. Trace offers the only shelter for miles around, and agrees to take them in until she can safely continue. His simple bachelor existence never anticipated kids and women in the picture and their arrival is unsettling–yet enticing.

Of course, I couldn’t resist one more bargain. This is an author unfamiliar to me but checking her book out a little, it seems like it could be a good one. Cold Terror: (Cold Harbor book 1) a bargain at $1.31. I want to read it and see what this author is all about.

Forensic artist Hannah Perry’s skills make her a valuable asset to the police in solving criminal investigations.
Now she’s taking a much-needed vacation on a secluded island with her young son. But a young woman has been murdered. Her body unidentified. Her skull recently discovered by the police, and Hannah feels compelled to help find the killer. She decides to work on the reconstruction in the evenings while her son sleeps. But as the woman’s face takes shape, an assailant invades Hannah’s cabin and tries to end her life. Before he can permanently silence her, she and her son flee the island in a small boat. Trouble is, as they approach Cold Harbor, ocean waves capsize the boat, enveloping them both in cold terror.

But it also makes her the next target.
Former SEAL Gage Blackwell can’t believe his eyes as he plunges into the raging waters to rescue the pair. Owner of Blackwell Tactical-a law enforcement training facility and protection services agency-Gage pulls the woman he once loved from the angry ocean. When he learns of her attack, he vows to protect her while hunting down the killer. Alone and vulnerable, Hannah has to accept Gage’s protection-even if it means staying close to the man who’d once walked out on her without a backward glance.

Happy Reading on this cool (at my house, anyway) Sunday.

Our day started with howling wind but it seems to have settled down now. Although, it looks like things could change. It might be a good plan to check the forecast to be forewarned, just in case.

This winter has actually been better than we could have hoped, after the huge storm in the fall with predictions for more to come. The storms did materialize but didn’t manage to make it far enough north to affect us. Our neighbors to the south, however, were buried in snow. We feel bad for them. On some levels it’s not fun. Snowmobilers, on the other hand, love it. The joys of winter.