BookBub has a bargain suggestion for us.

A detective’s daughter. A rugged rancher. Can they track down cattle rustlers and lasso love?

Callie Houston needs a break from misery. But when her car breaks down on her way to a rodeo, she finds herself stranded in small-town Montana. Praying that God has a plan for her misfortune, she’s flattered when two handsome brothers offer their ranch for the night.

Luke Manning isn’t sure he’s ready to settle down. But when he and his brother stumble across a woman down on her luck, neither hesitates to compete for the beauty’s affection. But if he wants to win her heart, he must prove he’s different from the shallow men of her past.

As she works with Luke to hunt down a band of cattle thieves, Callie realizes she’s falling hard for the kind-hearted cowboy. But when Luke discovers the out-of-towner making plans to head home to Minnesota, he scrambles to convince her to stay.

I found a few bargain books while browsing, all with authors new to me. Checking out the first few pages I decided I’d like to get to know them, maybe they will even become regulars.

Eastbound from Flagstaff: A Novel 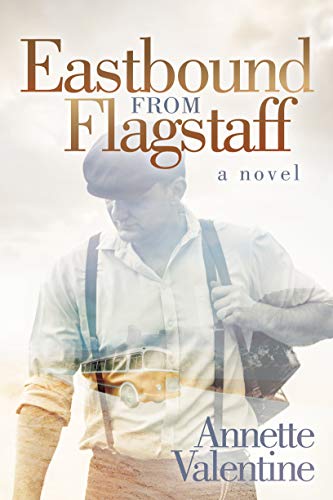 Simon Hagan is running from a lie, intent on believing his own efforts and perseverance can overcome anything. He abandons roots that are his foundational strength and hides behind his charm, living every moment as if life’s daring him to fail–again. He’s reckoning with his father’s God who could have delivered better outcomes but didn’t.

This first installment in an epic trilogy that begins in the 1920’s, unique in its purposeful illumination of the human condition and its ideological indifference to God, asks the question: “Why was God silent when I needed him?” Simon’s return to the notion of forgiveness is the catalyst for a new beginning as it reunites Simon to the place he once thought was the impossible dream. The answer for Simon isn’t blowing in the backwinds of his dream chase; rather, it unfolds in the outstretched hand of a villain.

1869, Wyoming.
Fleeing from her past, Angelica Truman carries more than just her scars; she carries hope that her groom, Holden, will learn to love his mail-order bride. Her hopes are dashed as soon as she meets the cattle rancher. Though he described himself as homely, he is the most handsome man Angelica has ever laid eyes on. Holden is more than just pleasing to look at; he’s a hard-working, devoted Christian who is looking for an Ephesians wife. Feeling unloveable and damaged, will Angelica flee before she is hopelessly and completely in love with Holden?

Three courageous women risk everything to find love on the Western Frontier. They get more than they bargained for when babies are unexpectedly thrown into the mix. Will they have enough love for a new baby and a new husband?

Montana Brides and Babies is a clean western romance from #1 Bestselling author Emily Woods. If you like clean, historical fiction about women who risk everything for love as mail order brides, you will love the Western Brides Sweet Romance series from Emily Woods.

I like discovering new-to-me authors and with so many of them this morning, it’s been a good day.

I hope this is a good day for you too.

from a happy reader/blogger who has found spending time in the yard reaps new friends.

This morning it all started with a friendly dog who just had to say hi (more than once) while I was down on my knees pulling weeds. Soon his dad came looking for him and I’ve now met one more of my neighbors.

It seems we moved to the neighborhood the same year and we are both transplants from other places. Me, from Western Canada, and he and his wife from Britain. Neither of us appear to meet people easily so it was nice, on both sides, to meet another neighbor.

Next time he passes my house on his motorcycle (I’ve noticed it before but not known where it lived) he’ll give a toot.

This has been a good summer, getting to know three neighbors better.