A Noble Masquerade was my favorite this week, but really, all of the books in this list were top notch. I think maybe it was the humor that put this one ahead of the rest, probably because I needed a laugh right about now.

Hawthorne House Series – A Noble Masquerade book 1 – Kristi Ann Hunter …..  This one was my favorite, it was so good I had to tear myself away from it when duty called (read that – when caught reading while neglecting responsibilities).

One of the best things was the dry humor, some scenes almost had me rolling on the floor, it was great. Humor wasn’t intended to be the main attraction though, just an added bonus. The unconventional characters and unexpected plot twists were the main attraction.

This book has intrigue, romance, sibling rivalry, and most importantly –  lessons in deportment. 😉 It was a fun read, I loved it.

Sloane Monroe Mystery – Murder in Mind book 2 – Cheryl Bradshaw ….. A thriller…. the body of a woman has turned up in a super market parking lot, and inestigators are convinced evidence points to the reemergence of a serial  killer.

Sloane has solved all of her previous cases but one, that of her sister’s murder, and this one looks like it was committed by her sister’s killer, he’s back.  He is brilliant, meticulous, leaving no clues. Can she rise to the challenge and outsmart him.

This book was a page turner. Another favorite. 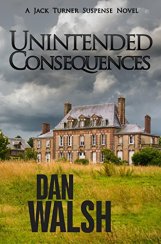 A Jack Turner Suspense Novel – Unintended Consequences book 3 – Dan Walsh ….. Jack and Rachel planned to spend a few days of their honeymoon visiting his grandmother who has never met Rachel. Jack is called away with emergency work obligations but leaves Rachel behind because he wants her to hear the incredible family story his grandmother has to tell.

It  all happened during the second world war and it’s a miracle any of them lived through it.

These days there seem to be many books written around the theme of WWII, and you would think there would be a sameness about them all, but there isn’t. Probably because there are as many unique stories as there are people in the world and the difference in detail adds a freshness. Authors have done an admirable job of finding something that would set their work apart from all the rest.

This story was worth every moment of reading time. Lest we forget. 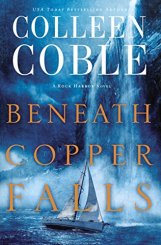 Rock Harbor Series – Beneath Copper Falls – Colleen Coble ….. This is one of Colleen’s latest releases and it is an excellent book. All of her books are, actually. Colleen is a successful and prolific writer with nearly 4 million books sold. I’m thinking most of you must have read at least one or two of her books, if you haven’t  – I hope you will.

A book description for this story would sound much like others I’ve mentioned recently; escape an abusive husband – relocate and hope to start life over in a safer place. The outlines sound the same but the details are as different and unique as any of our personal stories. Colleen’s stories are always well thought out with a depth that makes them worth reading and this one is a good example of that.

The Keepers of the Ring Series – Angela Hunt ….. Angela is another prolific and successful author, on a par with Colleen Coble, both selling in the millions of books. You have probably been exposed to her books as well, but if not I hope you will read some of these too. Their styles are different, so you would enjoy both authors. They both write in several different genres as well, reading their work doesn’t get old.

Angela has a number of historical series, The Keeper of the Ring is one of them. The time frame for this series is the settling of North America, before Columbus. The theory is that he was not the first one to arrive on our shores. There were others before him. This series sets out how that could have happened.

Roanoke, the Lost Colony book 1 …. this is the beginning, with a small number of settlers landing on a inhospitable piece of shoreline. Things do not go well and three children are all that’s left of them. They manage to escape but each of the three are captured by a different group and they don’t see each other again for many years.

Jamestown book 2 ….. the children have become adults, inspite of difficult and unfriendly circumstances. This will be a time of discovery as they cross paths again. This contact revives buried memories of families they once had. Others have come now to join the first settlers and have been a mixed blessing, some more hindrance than help. This book follows the continued journey of the three, their joys and their sorrows.

There are three more to go yet on this so I will be getting back to you with them.

Heart of the Mountains – This Treacherous Journey book 1 – Misty M Beller …. Emma, expecting a baby and afraid she may be arrested. is fleeing with her twin brother after the hanging of her husband for fraud. They are travelling on horseback through treacherous mountain passes when Joseph’s horse loses it’s footng and falls, injuring his rider.

Simeon lives a solitary and primitive life, hiding out in his grief, and is not prepared to receive visitors in need of help, especially with one of them an expectant female. It brings back too many painful memories.

Joseph and Emma are trying to make it to Canada where they feel they will be safe from the possibility of arrest, but with Joseph’s injuries they need Simeon’s help to make the journey. Winter will be settling in soon and time is running out. That’s what Simeon is afraid of, time running out.

I hope there is somehing here to inspire you. Be sure to check out these authors if they are new to you. Or, even if they’re not.