Magic happens when a book sinks in it’s hooks and you just can’t put it down. I love it when that happens. Two books in a row this time. I’m still smiling.

I feel like I need to come up with something momentous to say when I get to the end of such a good book but … I’m at a loss as to how to adequately describe the experience. Some people are so good at expressing their feelings and I’m jealous.

Falling for the Foe was the first book read, (it’s still a bargain price) a romance, and I loved it. It seemed like no time at all and it was finished. 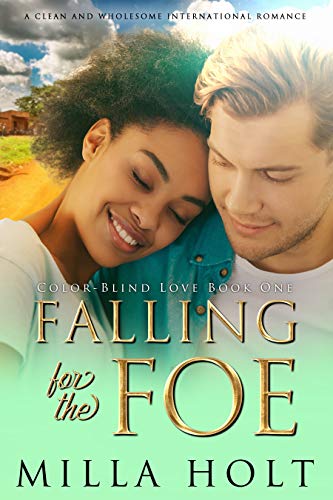 She can’t stand him, and he blames her for his company’s woes. Now, they have to work together.

Nia has devoted her career to fighting for life-saving medicines for Ugandans with HIV. But when first-line treatments begin to fail, she must find a pharma company willing to supply her clinics with affordable medicines before patients start to die.

Too bad her firebrand activism just led her into a highly-visible online clash with the head of the pharma company that owns a new and powerful anti-HIV drug.

Magnus is poised to market a game-changing treatment for HIV, but an avalanche of bad PR threatens to destroy his company’s reputation and kill his bottom line. When he travels to Uganda in a bid to boost his social justice credentials, he’s not expecting to feel such a deep attraction to the woman whose viral blog post led to all his troubles.

To get what they want, their only solution is to work together. He’s out to rescue his business, and she’s trying to save lives. Neither ever dreamed it would be their hearts on the line.

The second book was a surprise. I’m not sure why I didn’t expect to love it but I just didn’t. What a nice surprise when it turned out I was wrong. It was a great read. It wasn’t perfect, there were places where I skimmed and moved on. Overall though, it had my attention and I loved it.

The Vacant House (it’s still a bargain too)

She knows she didn’t do it, but everybody thinks she did.

It all begins when best-selling author Sophie O’Brion is the last person to see a murder victim alive. She looks even more guilty when a woman from her church is beaten, and Sophie was seen with her just hours before. Suddenly, people she has known her entire life begin pointing accusing fingers at her.

Marine Master Sergeant Burke Maguire, an old flame who dumped Sophie years ago, has recently been hired as a police officer in Forman Falls, Texas, and is assigned her case. She doesn’t want his help.

As she gets deeper and deeper into trouble, though, she must rely on him, but trusting him is another matter.

Will they be able to work together, maneuver dangerous twists and turns, and finally clear her name?

One nice thing about the progression of this story, it kept me guessing until the very end.

I’m not sure what’s next. I’m test driving a couple of books but they are all looking iffy.

In the meantime, Happy Reading!